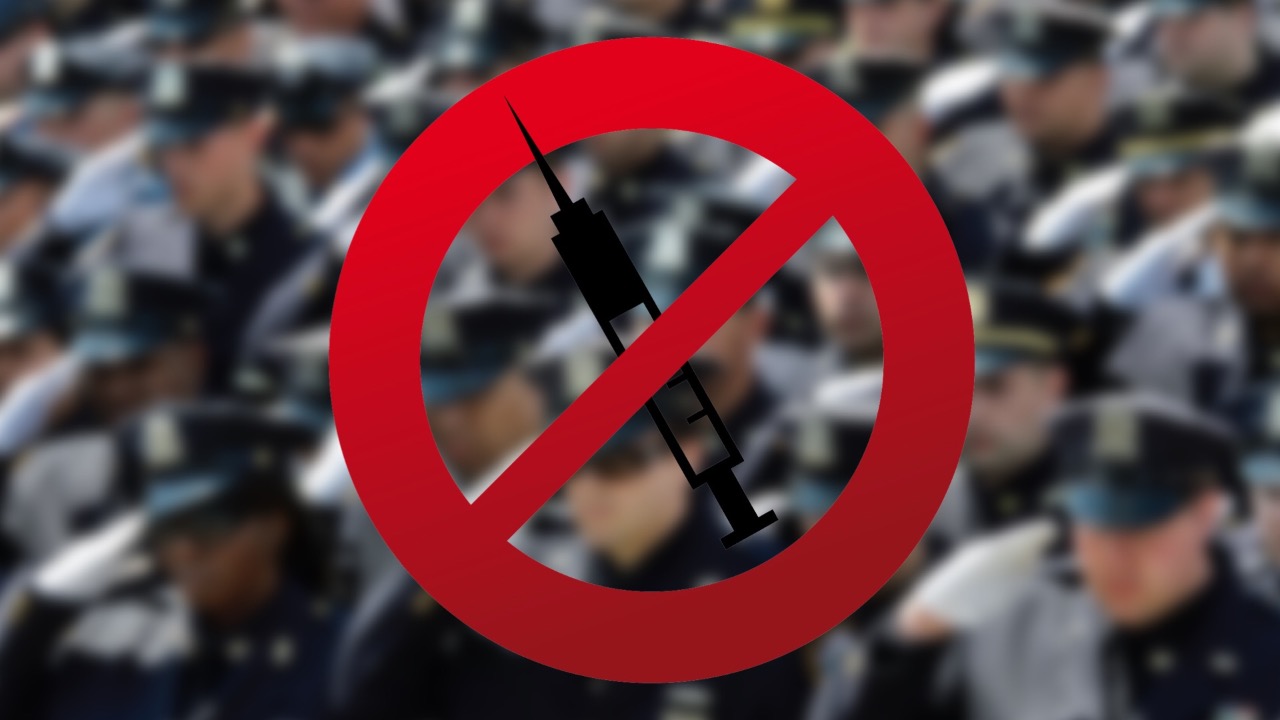 My name is Nicholas Smith, I am a NYPD Detective. The intention of this fundraiser is to collect money for any NYPD Uniformed Members of Service who are facing financial hardships and/or have been placed on unpaid leave, modified, suspended or terminated due to sweeping vaccine mandates recently implemented by the City of New York under the authority of Mayor De Blasio. As New Yorkers-- our neighbors, many of whom are NYPD personnel, abandoned by leadership, enter the cold winter months (and the holiday season) facing leave without pay and potentially facing termination. As United States citizens and proud, strong, principled New Yorkers we know this cannot stand on our watch. It is our intention to ensure members and their families may be kept warm. All proceeds from this fundraiser will be distributed to NYPD Uniformed Members of Service and their families who have been adversely effected by the City of New York's sudden and arbitrary vaccine mandates on City Municipal Workers in lieu of a viable weekly testing option and/or routine antibody tests.

NYPD personnel who seek to benefit from this fundraiser should apply at the link provided where they will be asked to privately provide their name, license, NYPD ID, proof of leave and email so that funds may be distributed properly. The intention of this fundraiser is to distribute funds to brother and sister MOS as soon as possible.

The administrators of this fundraiser proudly support the manufacturing and distribution of a COVID19 vaccine to those in the general public who freely choose to receive it. The purpose of this fundraiser is NOT to dispute the efficacy of this or any  medical procedure but merely support the very American principal of having the liberty to choose. It's of the best interest of all Americans to ensure Government Employees have the same right to body autonomy as the rest of the general public. This fundraiser may not only serve to provide assistance to NYPD Personnel in need but to those in the public who require more appropriate services.

If the City of New York happens to, god willing, rescind their mandate and change their widely insensitive stance on this matter, ALL funds to intended for this cause will be reallocated to a cause(s) closely related to NYPD Uniformed Members of Service and the effects of the COVID19 pandemic.

On Monday, October 25, 2021 personnel from The FDNY, NYC Sanitation and The NYPD spoke in front of a crowd of roughly 15,000 people after marching side by side with the residents of New York City and other City Municipal Workers. While there was minimal media coverage, plenty of people witnessed with their own eyes the message. I'm not a public speaker but I am proud to say that I had the honor of speaking at this event. This was the message I had hoped to get out:

I'm of course aware of and concerned by the (albeit allegedly rare) risk of vaccine-related injuries despite their proclaimed general safety. Merely labeling a vaccine related injury rare is a hollow assurance when you’ve personally witnessed or suffered from one yourself. I wasn't on the job, but I'm old enough to remember the proclaimed general safety of the air quality in the vicinity of Ground Zero and Downtown Manhattan in the weeks that followed 9/11. Then New York City Health Commissioner, Neal L. Cohen called the air around Manhattan "smokey but safe to breathe." For a while we all trusted he was right until one day it turned out he never was. As New Yorkers, every one of us has witnessed family, friends and coworkers suffer the consequences of such horrible guidance. Now, the Health Commissioner of New York City, Dave A. Choski, under the authority of Mayor De Blasio, has issued an order repealing the option for weekly testing in favor of sweeping vaccine mandates for ALL City Municipal Workers. Is New York City prepared to assume the financial and ethical burden of being so wrong once again? Better question, are the tax payers?

I'm recently married and have a young stepdaughter. My wife and stepdaughter depend on me to be healthy and gainfully employed. I had COVID in July and undoubtedly possess antibodies that in a strictly scientific sense should at least warrant consideration as an adequate defense against this virus. At this point, I believe rare instances of vaccine-related injuries pose more of a threat to my family and me than the virus itself. Like thousands of other NYPD officers I've been coughed on by individuals suffering from tuberculosis. I've been bled on by folks diagnosed with HIV. I've entered the homes of and been in close proximity to an unfathomable quantity of individuals with any number of communicable diseases my entire career. Immediately after which moving on to the next call for service and into the next home of a person in need without so much as a moment of doubt from the Mayor, the NYC Health Commissioner, the NYPD Police Commissioner, any supervisor within the NYPD, or the general public. For this reason, what's going on now pertaining to COVID19 is of little concern to a vast majority of the NYPD and in my experience, the general public agrees. Frankly, I believe my walking around with antibodies for the virus rather than solely a waning vaccine is of distinct but rarely recognized value to the public. Yet thousands of good cops and City Municipal workers under the same circumstance stand to lose their jobs as a result of shallow consideration by those in power.

Are the good people of New York City confident those jobs will be filled by adequate replacements? Will they be filled at all? Are New York City neighborhoods better served by the National Guard than the NYPD? Is the general public convinced by the reputation of government officials to get policies pertaining to health correct? Would you bet your life on them? At the risk of stating the obvious, while covid related mandates may later be determined to be ill-advised and pulled back (just as clean air policies at Ground Zero were), the vaccine CANNOT be pulled out of the arms of so many already and soon to be coerced into this ultimatum.

I'm frightened of what comes next. With municipal workers forced into becoming  100% vaccinated who do the crosshairs then get placed on? Private businesses? Private city residents? Our children? Under the authority of Mayor De Blasio what will the next order of business for the NYPD be? Enforce Vaccine Compliance on the remaining general public? New York City has tasked the NYPD with suddenly strictly enforcing vague and typically loosely abided by laws or policies before and it has not ended well. These are the sorts of infringement on freedoms that lead to people getting hurt or killed and police officers later arrested or fired. There are many New Yorkers, particularly in minority communities, who still strongly oppose any sort of vaccine-related mandates. I fear that vaccine mandates imposed onto The NYPD may pit the police and these communities against each other in ways we can barely imagine. Just look at the animosity which already exists in the general public between some of those who chose to be or were otherwise coerced into the vaccine toward those who are unvaccinated.

The flames of that animosity fanned by politicians pushing an agenda. The city supposedly seeks to encourage positive police and community relations yet they are consciously driving a wedge between the police and the community with these mandates. This perspective is being widely ignored by politicians, the media, and even union heads tasked with keeping membership safe physically and from prosecution or persecution. Yet, I believe it may be the most important issue of all. Under these policies, those in the minority community, including minority-owned business owners will be asked, then forced to fire employees or even close up shop. Expecting peaceful compliance on this is a fools errand. They aren't going to suddenly be convinced to trust the government and comply with vaccine mandates because city municipal workers were coerced into doing so. Nor do I expect they should. That leaves police officers in a precarious position when responding to any calls for service in which the initial and/or chief complaint is vaccine non-compliance. To politicians pushing vaccine mandates onto your constituents-- To the city residents who support those politicians and their mandates. As it pertains to calls for service relating to vaccine noncompliance, what level of force against ANY person are you willing to publicly say you are comfortable with? My answer is none.

In closing, that puts me in a difficult position. Will I be placed on unpaid leave, suspended, or fired for refusing to take the shot? Or, will I be placed on unpaid leave, suspended or fired for later refusing to take police action against an individual who exercises their own freedom and body autonomy? I know there are those amongst us who support my message today. Sadly, I also know there are some who wish to see me fried for speaking so freely and honestly. To Police Commissioner Shea who I met just a few months ago and was so gracious to my father and I—To NYPD personnel of every rank who under tragic circumstances would surely rush to call me your brother—To the politicians elected to represent the good people of New York—To my fellow City Municipal Workers and to the general public: We have always been prepared to lay down our lives in defense of yours. This is our 10-13. This is your neighbors, your friends, your coworkers, your constituents and their family's desperate cries for help. Will you run to our aid or sit idly by.

Praying for my brothers and sisters. May this be a temporary thing so we can all go back to doing what we love. Hold The Line!

Stay Strong! The "real" America is with you!

I pray for your continued financial support, and income opportunities, and for the health and safety of you and your loved ones.

Be brave. Do not quit

Support NYPD Who Will Be Placed On Leave Due To Vaccine Mandates
$5,141 raised of $100,000 goal
63
Donors
103
Shares
32 Days
Running
Donate
Campaign Organizer